Anatomy of the Chargers’ 3-4 defense

Over a month ago the San Diego Chargers drafted defensive end Joey Bosa with their third overall pick. Along with Bosa the Chargers drafted two more defensive players. One of them was Bosa’s running mate at Ohio State, Joshua Perry. These look to be great additions combined with the free agent signings of defensive tackle Brandon Mebane and safety Dwight Lowery.

Some Chargers fans are clamoring for the Chargers to switch defensive schemes. I’ll tell you why this can not and will not happen anytime soon. First, I’ll tell you the difference between the two schemes. For the purpose of this piece it will just be a base 3-4 scheme versus the base 4-3 scheme. After this I will give my opinion on why switching schemes wouldn’t be beneficial for the Bolts moving forward.

I’ve stated in a previous article (Bolt Up For Bosa) that the Chargers only run their base scheme about 50% of defensive snaps. It’s these 50% of snaps I will be focusing on. That being said what is a 3-4 defense? It has been used famously by Bum Phillips, the father of Wade Phillips.

Used by the Houston Oilers in the 70’s, it’s predicated on pressure by overwhelming the offensive line with multiple attacking defensive players. If used correctly this scheme can be virtually unstoppable. This was defensive scheme used most brilliantly by the Denver Broncos to defeat the Carolina Panthers in this past years’ Super Bowl.

The 3-4 was the staple of Dick LeBeau’s defense which helped drive multiple teams to Super Bowl appearances. Lebeaus’ defense has yielded two wins and four losses in the Super Bowl. In New England, the 3-4 has been the driving force behind the Patriots dynasty. Yes, Tom Brady has made his throws but its been the defense that’s given the Patriots four Super Bowl titles in 15 years.

Breaking it down the 3-4 consists of three down linemen and four linebackers. The four linebackers have endless possibilities on how they can be placed. There’s a multitude of packages to utilize. This makes the 3-4 a hard defense to plan against. With four linebackers you don’t know who is blitzing or who is dropping back in coverage. The point of a 3-4 defense is mismatches. It’s built to stop the run and apply endless amount of pressure on the opposing teams’ offensive line. In theory, the Chargers should be good at run-stopping although this has been the Achilles’ heel of the defense over the past several years.

Here’s a diagram of a basic 3-4 defense. Anchoring the back end of the defense from left to right will be left cornerback Jason Verrett. At Free Safety will be Dwight Lowery. Next to him will be strong safety Jahleel Addae. The right cornerback will be Brandon Flowers. Keep in mind this is how it stands right now. A lot depends on training camp and if the Chargers sign other free agents.

So now know how the Chargers will run their basic 3-4 defense. What is a 4-3 defense? The base 4-3 first came to us under Tom Landry when he was the Giants defensive coordinator in the 1950’s. He then made it even more famous with the Dallas Cowboys and through their vaunted “Doomsday” defense. Ever since, there’s been multiple variations of the scheme from the Bill Parcells stack defense to the Wide-9 defense famously used by the Philadelphia Eagles. 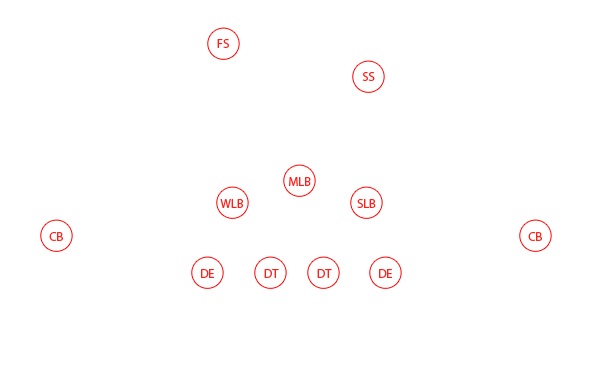 The Chargers run a variation of the 4-3 in a hybrid nickel package. The nickel package features Melvin Ingram and Jerry Attaochu with their hands in the dirt. The 3-4 defense has been implemented since 2001 when Marty Schottenheimer took  over as head coach. Since then the Chargers have had a few dominant defenses in ’06, ’07, ’09 and 2010. Its been proven very effective when the right pieces are in place. In 2016 this is such the case. My main reason for this belief is Joey Bosa and the signing of cornerback Casey Hayward. The Hayward addition was an amazing pick up.

It’s all about the anchor of the 3-4, the nose tackle. A viable anchor is something the Chargers have lacked for so long. Since the days of Jamal Williams its been a revolving door at this position. Brandon Mebane probably didn’t make headlines to the casual Chargers fan. I believe this is the most underrated pickup of the whole offseason. Mebane can garner double- and sometimes even triple-teams.

This defense, hell, this whole team is going too shock a lot of people. As I said earlier the 3-4 requires almost pure selflessness from its three down linemen. It starts with Mebane. I may call him Bane by seasons’ end. If you know Batman then you understand the reference. Its been five years in the making with this defense. Why change philosophies now when this defense is so close to grasping greatness? Its proven to be a dominant defense in the past. It can and will be for years to come.